Immerse yourself in the essence of Spain for 7 days, travelling from Seville in the southwest all the way to Barcelona in the northeast.
Back to Spain Itinenaries
Book this trip
Print this trip

Immerse yourself in the essence of Spain for 7 days, traveling from Seville in the southwest all the way to Barcelona in the northeast. Delve deep into the country’s Roman and Moorish heritage, exploring the lands of the ancient kingdoms of Aragon, the Levant, and Al-Andalus, and discover the bygone medieval mix of Christians, Muslims, and Jews that used to coexist here. Visit some of the world’s most dazzling palaces and awe-inspiring churches, synagogues, and mosques, admire the works of great artists, and behold magnificent monuments that have withstood the ravages of time.

Expand All | Collapse All
Day 01 : Madrid – Cordoba – Seville
Join the group at the meeting point, in the underground parking of the Plaza de Oriente, at 8:30 in the morning. From there, drive southward through the fields of La Mancha, literary antihero Don Quixote’s homeland. After a brief stop at Puerto Lapice, cross through the natural border of Despeñaperros and delve into Andalusia, a region filled with an enormous heritage from a splendorous past. Once in Cordoba, go on an impressive tour that will take you to its mosque and many other sites. Ease your mind and spirit by strolling through the narrow winding streets of the Jewish Quarter. In the afternoon, after a short two-hour ride, reach Seville, where you’ll check-in and have dinner at the hotel. Overnight in Seville.
Day 02 : Seville
After breakfast at the hotel, head out on a morning panoramic tour of the city. Marvel at the exterior of the second-largest cathedral in the Catholic world after St. Peters in Rome, before continuing to explore the Santa Cruz quarter. This charming neighborhood is a natural setting for “Carmen” and where the myth of “Don Juan” developed. Later visit Maria Luisa Park and Plaza de España. The afternoon is free for you to spend at leisure discovering exclusive views or specific flavors of this lively city. Dinner and overnight at the hotel. Overnight in Seville.
Day 03 : Seville – Granada
Wake up to breakfast at the hotel before driving east through the Caliphate road and into the heart of Andalusia. Along the way, contemplate the endless number of olive trees that flank the road to Granada and its incredible monumental environment, the last stronghold of the Moorish Kingdoms up to 1492. Once you set foot in this historical city, visit the world-famous Generalife Gardens that have inspired several authors with its sound and sights, such as the well-known “Tales of the Alhambra” by W. Irving. Dinner and accommodation at the hotel. Overnight in Granada.
Day 04 : Granada – Valencia
After breakfast at the hotel, start driving towards the Mediterranean coast. After passing through Murcia, the capital of the fertile region of the Segura river, turn north via Alicante, the second-largest city in the region of Valencia. Once you reach Valencia, step off the coach and start discovering one of the main capitals of the Mediterranean coast, which is also the hometown of the world-famous and delicious paella. Make sure to find a restaurant in which to try it while staying here. Overnight in Valencia.
Day 05 : Valencia – Barcelona
Charge your batteries with breakfast at the hotel before joining a morning city tour of this bright city, which includes a drive through the old city. You will get to admire the most prominent buildings Valencia has to boast, and drive past the old riverbed of the Turia, all the way to the avant-garde City of Arts and Sciences complex and contemplate the emblematic exteriors of its six buildings. In the early afternoon, depart northwards and drive along the Mediterranean coast to Catalonia. Along the way, pass through Tarragona, known in ancient Rome as Tarraco. Then reach Barcelona, the homeland of the famous architect Gaudi, a true emblem of Catalan modernism. Overnight in Barcelona.
Day 06 : Barcelona
Breakfast at the hotel is followed by a morning city tour of Barcelona, well-known worldwide for hosting the 1992 Olympic Games. Drive along this breath-taking city’s main avenues and marvel at its impressive modernist buildings, the most spectacular of which are by Gaudi, such as La Pedrera and Casa Milá. Many of these buildings are listed as World Heritage Buildings by UNESCO. Later, see Montjuic Park with its spectacular views of the city and harbor; the Olympic Ring; the monument to Columbus; and the Olympic Port. Finally, spend the rest of the afternoon exploring the city at leisure, making the most of its many attractions and varied gastronomy. Overnight in Barcelona.
Day 07 : Barcelona – Zaragoza – Madrid
After breakfast at the hotel, return to the southwest through an industrial and agricultural area and passing through Zaragoza, the capital city of the region of Aragon. It lies on the banks of the gorgeous Ebro River, the most copious river on the Iberian Peninsula. Zaragoza, known as Cesar Augusta during the Roman period, played an important role throughout Spanish history and its architectural and cultural heritage speak volumes about it. Enjoy some free time to see the impressive Baroque architecture of the Basilic-Temple of Our Lady Pilar. Continue then to Madrid, where the tour reaches its conclusion. Breakfast included.

Seville: Discover the charming capital of Andalusia, admire its interesting architecture and learn about its glorious past while visiting the world-famous Plaza de España, the former royal palace, the imposing cathedral, and the lively old Jewish quarter.

Cordoba: Visit a real Spanish treasure, with an enchanting past and an inspiring present. Wander around Cordoba’s former Jewish district, explore the old town, and get closer to the spirit of this mediaeval marvel.

Granada: Enjoy a fascinating tour of the historical city of Granada. Admire its architecture, learn about its rich history, and let its mesmerising beauty dazzle you.

Valencia: City of culture, nightlife and business. Its beaches, port and promenade all form part of its charming identity.

Barcelona: Spend a day exploring the Gothic glory of the old town and another discovering the mesmerising modernist heritage bequeathed by architect Antoni Gaudi. 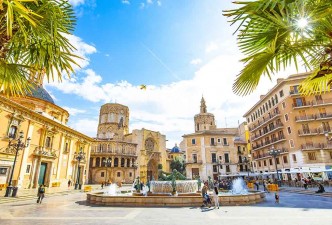 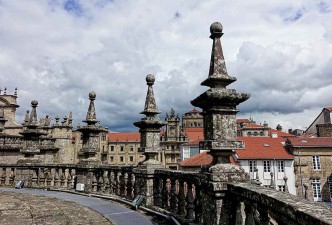 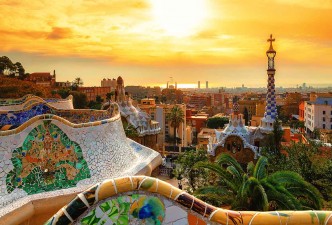 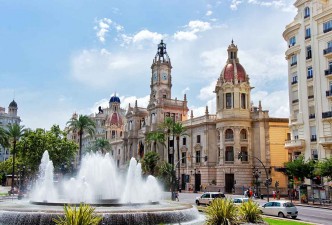