Home Asia PacificMongolia
Back to Destinations

Embark on holidays in Mongolia that will take you to a different world altogether, start your journey in Ulaan Baatar and see well-developed infrastructure, move towards the deserts of Gobi, delight your eyes with the view of wild takhi horses eating grass, view of mountains covered snow will leave you speechless.

Mongolia, a nation bordered by China and Russia, is known for its vast, rugged expanses and nomadic culture. Its capital, Ulaanbaatar, centers around Chinggis Khaan (Genghis Khan) Square, named after the notorious founder of the 13th- and 14thcentury Mongol Empire. Also in Ulaanbaatar are the National Museum of Mongolia, displaying historic and ethnographic artifacts, and the restored 1830 Gandantegchinlen Monastery.

It’s probably no surprise that our Mongolia tours are all about the wilderness – soaking in the hot springs of Tsenkher or riding camels through the Khogno Khan Mountains Just wait until you catch your first glimpse of sunrise over the Asian Steppe. There’s no other view on Earth quite like it: mile after mile of rolling grassy tundra, dotted with white-domed Gers and broken up with golden dunes or the craggy peaks of Tavan Bogd.

With its Communist past and a (proudly) democratic future, Mongolia is also ready to great the 21st Century with a welcome smile.

Your holiday smile is our ultimate goal. 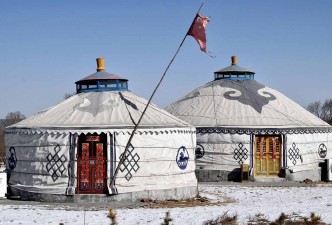 Spend nine nights in the rugged Mongolia, a rapidly changing country where…